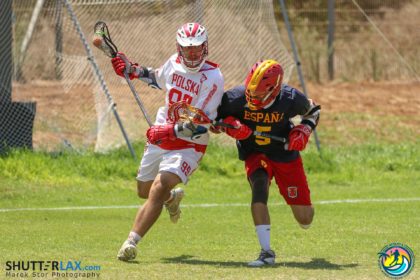 Mikołaj Buszko, a member of Polish national team in Lacrosse, suffered a serious shoulder injury during a league game few weeks before World Championship. Not only his participation in the championship was called into question – during an examination in the emergency room he was advised to completely stop playing this sport.

Thanks to a quick rehabilitation with RSQ1 method Mikołaj has returned to the top form within 4 weeks.

As he said: ” I played in the final game (of the Polish League) a month after the contusion,
and in Israel (World Championship), two months after the accident, I played 8 games in 8 days.
I did not have any restrictions in my head nor any uncertainty about my shoulder – both when scoring or passing or during fights for the ball.”

During Championship he used RSQ1 device to speed up the regeneration of his body after the games and to “fix” small bruises. The full Mikołaj’s story is available here: https://rsq1polska.pl/historie-pacjentow/dzieki-rsq1-i-nts-pojechalem-na-mistrzostwa-swiata

Picture was made by Marek Stor: www.shutterlax.com

Pilotstudy: The effect of the RSQ1 during rehabilitation after ACL reconstruction